The Espai Víctor Català-Alfolí de la Sal houses the most representative artistic work (oil paintings and drawings), particularly those that refer to Solitud and to the landscape, in harmony with the exhibition on the first floor that explains the evolution of the landscape in L’Escala. There are also the first editions and translations of her main piece of work Solitud, as well as a replica of the original manuscript. There are three panels that explain her biography, the origin of the novel and the literary landscape of Solitud. You can also see personal objects, such as the pen the author used to write with.

This will also be a point of reference for the Víctor Català University chair in Modernisme studies, at the University of Girona, directed by Margarida Casacuberta. 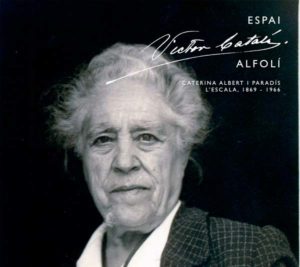 THE LITERARY LANDSCAPE OF SOLITUD, A UNIVERSAL BOOK

CATERINA ALBERTI I PARADÍS, VÍCTOR CATALÀ: THE WOMAN, THE AUTHOR

Víctor Català, the pseudonym of Caterina Albert i Paradís, was born in L’Escala on 11 September 1869, into a family of rural landowners. At a very young age she started to draw, paint and write. She became known in 1898, when her poem Lo llibre nou and the theatrical monologue La Infanticida were given an award at the Jocs Florals literary competition in Olot. The toughness of the subject and the fact that it was written by a female author led to a scandal that caused her to take refuge in a male pseudonym: Víctor Català. She corresponded with more than 600 correspondents and her main literary references were Joan Maragall, Narcís Oller and Àngel Guimerà.

Her extended literary production basically focuses on the fight of individuals against the hostile elements that make it impossible for them to fulfil themselves, and are grouped into three stages. The first stage belongs to Modernisme and is the most diverse one. Between 1901 and 1907, she published two volumes of poetry, El cant dels mesos (1901) and Llibre Blanc-Policromi-Tríptic (1905); a volume of plays, Quatre monòlegs (1901); collections of stories, Drames rurals (1902), Ombrívoles (1904), Caires vius (1907) and the novel, Solitud (1905), which was awarded the Fastenrath Prize (1909), was translated into numerous languages and established her as a universal writer. In 1915, she joined the Acadèmia de la Llengua Catalana (Academy of the Catalan Language), in 1917, she presided over the Jocs Florals literary competition in Barcelona and in 1923, she was the first woman to belong to the Real Acadèmia de Bones Lletres (Royal Academy of Literature).

Her second stage includes the collection of stories La mare Balena (1920), the novel Un film 3000 metres (1926), Marines (1928) and Contrallums (1930). The Spanish Civil War interrupted her production. The third stage started with the publication, in Spanish, of Retablo (1944), and continued with the autobiographic collection Mosaic. Literary impressions of domestic subjects (1946) and two collections of stories: Vida mòlta (1950) and Jubileu (1951). Caterina Albert i Paradís died in L’Escala on 27 January 1966, leaving an extensive literary production and universal works that have survived the passage of time.

THE ORIGIN OF THE NOVEL SOLITUD

“[Solitud] is a genuine human document, explained using supreme art and a captivating truth.” Editorial note to the 1929 bibliophile edition.

In 1902, as a result of the success of the collection of stories Drames rurals, the editor of the magazine Joventut, Lluís Via, asked Víctor Català to write a novel to be published in weekly chapters. Between 1904 and 1905, the author delivered these chapters, with intermittent delays caused by the illness of her mother and her family obligations. Initially, the novel was to have 20 chapters, but the author reduced this to 18, because of the anxiety that the speed of the publication caused her. The two unpublished chapters were intended to be added to the fifth edition, on the editor’s suggestion, but they disappeared during a confiscation in the Civil War and only a few fragments were saved which were added to the chapter “Neteja”.

The novel tells the story of Mila, reluctantly married to Maties, a spiritless man, with whom she is obliged to live as a recluse on an isolated mountain. There, she has to learn to deal with external loneliness, but also internal loneliness, surrounded by characters such as the shepherd Gaietà, who is good and noble and Ànima, an evil spirit who was to unleash the final tragedy, from where she would find the strength to make her way as a free being.

Despite all the obstacles, Solitud was Víctor Català’s main production and a leading work in Catalan and universal literature. Her mastery of language, the expressive richness and the expert treatment of the inner world of the woman in conflict with her social environment make Solitud a universal classic along the lines of Madame Bovary, by Gustave Flaubert, Anna Karenina by Leo Tolstoy or Henrik Ibsen’s A Doll’s House, and place the author on a par with writers such as Jane Austen, the Brontë sisters, Grazia Deledda and Emilia Pardo Bazán. Solitud continues to be published and translated. It is also been adapted to the theatre, the radio and the cinema thanks to its timeless values.

THE ORIGINAL MANUSCRIPT OF SOLITUD

On the death of Caterina Albert i Paradís, in 1966, her nephew, Lluís Albert i Rivas, took over the care of the literary and artistic legacy of the author and catalogued her manuscripts. In 1975, he created the Víctor Català Museum-Archive in the Clos del Pastor, a building in the Passeig Marítim in L’Escala. Lluís Albert had the original manuscript of Solitud restored and made the documentation available to people researching the work. In 2017, he made a donation of the writer’s legacy to L’Escala Town Council. The literary and artistic collection has been restored at the Restoration Centre of Assets of the Generalitat and can be consulted in L’Escala Historical Archive (AHE) in the building of the Alfolí de la Sal-L’Escala Museum.

The landscape is the central feature of the novel Solitud and is reflected in the soul of the main character:

The work was inspired by the calcareous rock Montgrí Massif and by the chapel of Santa Caterina, as Víctor Català said in a conversation with Tomàs Garcés:

“Everyone has recognised the mountain of Santa Caterina, which stands between L’Escala and Torroella, as the mountain in which the action of Solitud takes place. They are close. It is not exactly the same, I tried to disfigure it a little, although I did make use of many of its features. Nevertheless, I had only climbed it once: one day on my saint’s day. I climbed up the same rough paths that Mila and Maties used. I breathed in the atmosphere that was meant to express them.

The Montgrí, between the Alt and the Baix Empordà regions is popularly known by different names depending on where it is seen from: the dead Bishop, the dead Woman, the sleeping Woman. In Solitud, Víctor Català called it the Blue Doll. The mountain that can be seen from the chapel, in the words of the shepherd, is Orifany due to its shape that looks like the back of an elephant. The mountain with the castle is compared to a woman’s breast. In the work, one can identify the town of Murons as Torroella de Montgrí, Ridorta as Bellcaire and Llisquents as Verges.

“Beneath her, one could only see the waves of mountains, of immense, silent mountains that lay down, that flattened, that submerged in the shady stillness of dusk which, like a black fog, spread all over them, burying them. Mila searched in that blue desert for the joyful stain of a cloud of smoke, of a small home, of a human figure… But she was unable to discover anything, not even the slightest sign that would reveal the presence and the company of people.

“What solitude” she murmured, terrified, feeling as if her heart had suddenly become as shady or even more so than those depths.

Solitude is also a main feature of the work, as indicated in the title and expressed in the final lines:

The filtrations of solitude had bitterly crystallised their destination.” 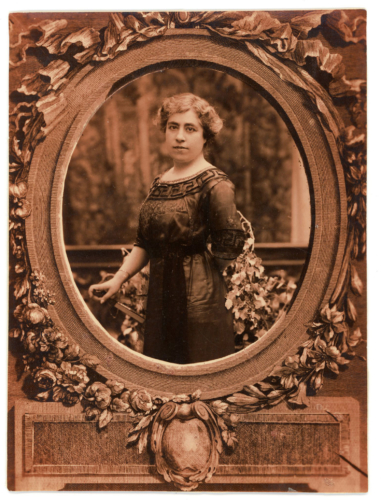 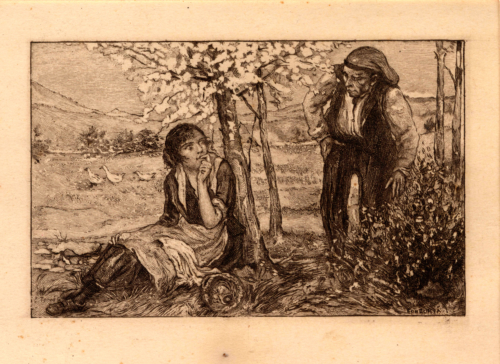 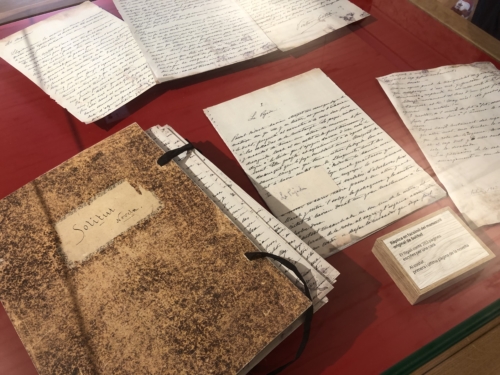 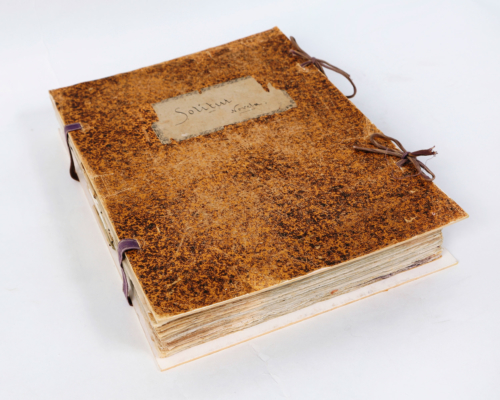 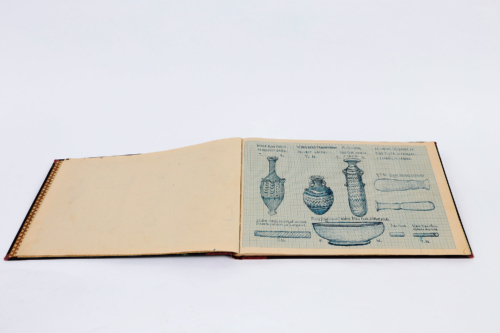 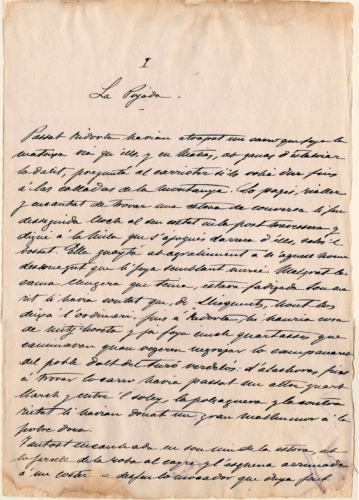 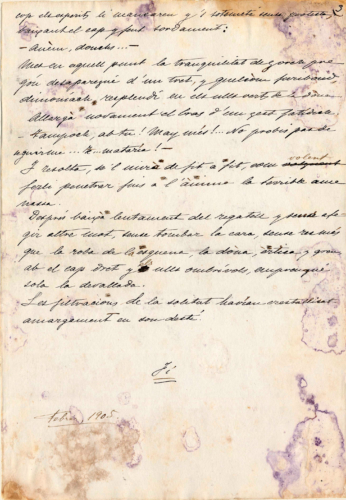 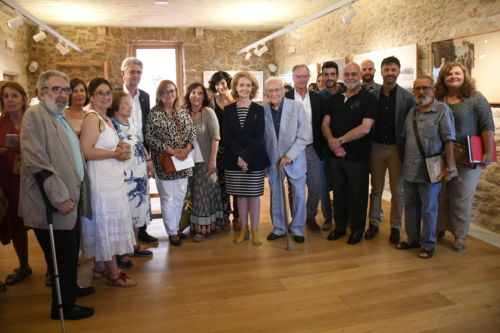